What the hell have I done?

I have needed to post something about this for quite a while, but I wasn't sure if I could get my mind wrapped around it. I have signed up to race a 50k trail run in Palo Duro Canyon on October 20th. As always with me there is a long story, but thankfully here is the short story instead. As my Dad would say I let my mouth overload my a**. That's it! That isn't always a bad thing, and as far as Tim is concerned I think that he is excited about putting me through another level of discomfort.

To make things even more interesting I decided to try to use this race as a fundraiser for our local American Diabetes Association. After I met the director, Martha Atwood, and saw the level of commitment this woman has to make our community healthier I couldn't not help out! If you feel inclined to donate here is the link to my donation page. I would greatly appreciate it!

I would be lying if I said I was't nervous about this endeavor.  To be totally honest I am beyond nervous! I know physically I can do the time, but the distance is what is overwhelming me. Over the next 26 days I will do my best to chronicle what it is like training for this distance, or at least how moronic I am. There might be a little less mention of beer for the next few weeks, but rest assured it will only be temporary.

Posted by runkeeblerrun at 10:13 PM No comments:

Panhandle Half Marathon and a Return to Speaking

Going into the weekend I was feeling tired and ready to rest, but as usual it wasn't in the cards. I had a 3 hour bike on Saturday, and Tim wanted it at a high cadence for the whole three hours. Which means in the normal world is that I looked like a hamster on a wheel going into the wind. Since Susan and I were both racing the inaugural Panhandle Half Marathon we both tried to take it easy for the rest of the day, but that was not going to happen. Either way we got up and met our great sitter, Amanda, so she could watch the kids while we were racing (not sure how much sleep she had from the night before, but she beat us there.) I didn't expect much for this race, but actually it went exactly as Tim had wanted for me. I ran around a 1:46, and considering how I went into the race I was happy with getting there. Thanks, to the guy named Kyle that pulled me in the last few miles, I doubt I would have kept that pace without him. My proofreader has asked that any mention of her race be redacted until further notice. I will mention that she got out there and did it! Some races are good and some are bad, but we each need to remember how blessed we are to get to race. 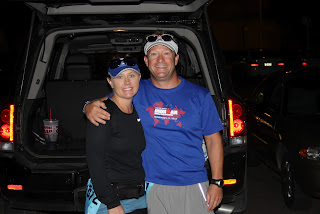 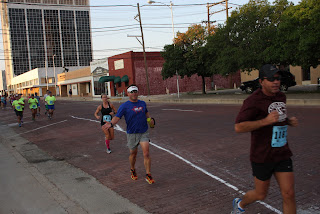 About to high five the girls! 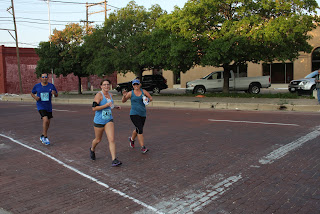 Susan saying hi to the girls!


Last week I had the opportunity to speak to a great group of people with the Caprock Ambucs  of Lubbock. Thankfully, Mike Massengale, was able to look past me getting choked up in Sunday School from telling some of my story and asked me to speak to the Ambucs. To this day speaking about my story and my Dad still gets me emotional, it feels like I am pulling off a bandage. Anytime I speak to a group my hope is that I can inspire someone to start working on being healthier. This day was a little different for me, because I was the one that was inspired. One of the ladies came up to me at the end to thank me for speaking. As we spoke she told me about one of her family members health issues. This family member has no control over some very serious issues, but the family does everything that is in their control to stay healthy.  We all look around and realize that a majority of people have health issues that can be prevented, but choose not to do anything. It doesn't take much. This week choose to fight for your health while you have the opportunity! 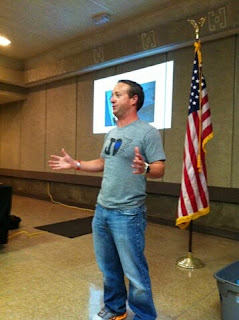 Speaking to the Caprock Ambucs

Posted by runkeeblerrun at 8:39 PM 2 comments:

This last weekend was the last triathlon of the season for me this year. It is a great race that is put on by Dee Dee Odorizzi at South Plains College called the Cotton Country Sprint. Since I have started triathlons I have always tried to make this race, because not only is it a fun reverse triathlon, but it has great food and live music at the end.

The reverse triathlon, for those of you that don't know, is set up as a 5k run, then a 14 mile bike, finished with a 400 yard swim. Just like last weekend it was short, fast, and intense. One of the best parts of the race was getting to meet, Sean Monroe, the guy from last weekend that I raced to the nearly puking finish at Tech.  This weekend I am glad to say that Sean won. Good job Sean!

Overall, I was really happy with how this race went. My run was good and steady, and I think it was the fastest 5K I have ever ran. The usual headwind we have on this race came on the second half this year, but gladly I was able to hold my speed. The first group of riders were far enough in front of me I couldn't see them, and the second group far enough behind me that I couldn't see them either so I was in my own lonely world for the biggest part of the bike. Once I got to the swim the closest guy was two lanes in front of me, and I was lucky enough to close the distance to half a lap. Unfortunatly, that wasn't enough and he still beat me. So at the end of the day I ended up with a 2nd place age group finish and 8th overall. So until next year my triathlon buddies!

This next weekend brings the American Diabetes Association walk in Lubbock on Saturday, followed by a 3 hour ride, and then on Sunday the first Panhandle 1/2 Marathon race. I have a feeling I won't be setting any personal records for that one.

After that I am heading to Snyder on October 6th for the White Buffalo 5K Stampede, and then one more race that deserves it's own blog coming soon. Have fun, stay active, and please if you drink beer, drink good beer!

Since we forgot to take the camera this year how about a pic of me racing and my support crew from 2008 :) 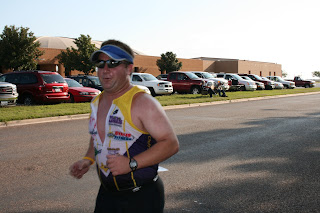 That face means that my heart rate is somewhere north of 190! 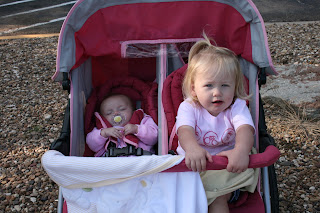 Not much has changed Allie sleeping and Anna fighting to stay awake!
Posted by runkeeblerrun at 9:19 PM No comments:

A Full Day of Racing for the Keebler Family

A lot has been going on the last week or so, and I didn't realize how bad I needed to get back to racing. Today's race was the Texas Tech Rec Sports Triathlon. A fun and fast race that is 400m swim, 12 mile bike, and a 2.5 mile run. If any of you are ever interested in trying out triathlon I can't recommend this race enough. The Tech staff puts on a great race for competitive people, and they even have a shorter distance that is the recreational distance. It is always a good time.

In years past I have seen so many new people trying out triathlon for the first time just for once, and sometimes it has been the first step in a new lifestyle. Then other times I have overheard some of the kids in complete disbelief when there friend showed for the start with no sleep and possibly still drunk. That one made me miss college. Today I heard an older guy mention that he has only swam twice in his life before the race, and that was last week. No matter he was still there this morning to start. I was really glad to have met him this morning.

Today Jerred and I decided to ride to the race, about 45 minutes, then race, and then end it with another 1:45 minute ride home. Needless to say I was good and warmed up for the start. The swim felt ok, but I  was in a bunch of folks at the end and couldn't get around them. Even with that my swim was still on track even a little faster.

I pushed the bike the first lap, and then tried to keep that pace throughout the four laps. After the first lap I could feel my legs starting to ache, and was really worried that I was pushing it too hard. Near the end of the bike the winds were picking up, but I was still keeping my pace even with legs that were filling like lead.

Going into the run I knew that I had a couple of guys right behind me, and I was going to have to push it as hard as I could. The first half one guy stayed right behind me until the turnaround, and then he made his move. I was able to stay right behind him, but we were pushing a hard pace for me. I wasn't sure if I was going to have anything left to try to go past him again. Near the end of the run is a small hill that I thought was as good as any place to go for it. When I passed him all I heard was, " Oh hell he has some kick left." I was going all out when I passed Susan, and she said, "uhmm you might want to push it he is right behind you." He wasn't at that point, but  she does have a funny way of motivating me. It was a lot of fun even if I was really close to puking at the finish.

After the race Jerred had talked me into going for a ride before we got back to the house. That turned out to be about an hour and forty five minutes of me trying to hang onto the back wheel of someone a lot better at cycling than me. To say the least I was hurting and am still feeling a long day of good pain.

We were able to finish off the day with Anna running in a  great race put on by Leigh and Nick Cordes called the Cardinal's Mud Run out at the Spirit Ranch. So it has been a great day of racing for all, and now time to get ready for the week. Another couple of races coming up  and big news, but more on that very soon! 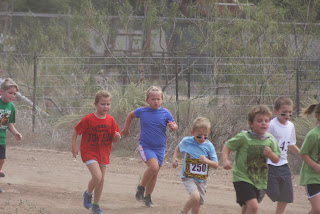 Anna and her friend Loren running 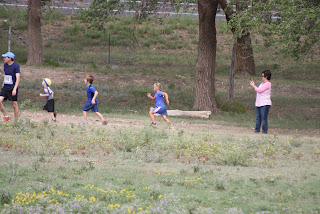 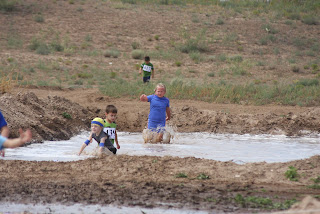 I think she is going to need a bath!
Posted by runkeeblerrun at 6:08 PM 2 comments: 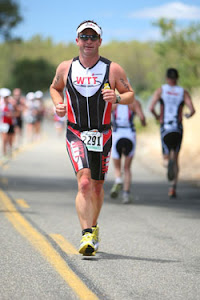 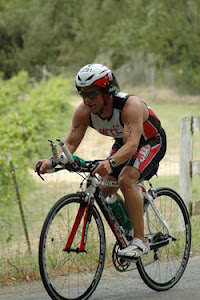